Finally, we were able to get back on the ice after a 2 year break.  The event was only confirmed in early Feb 22 and then final planning began in earnest to get all the bobsleigh, luge and skeleton athletes and staff from all 3 services out to Igls in Austria to enjoy a week of competition.  This was not going to be an ordinary Inter Services…… the single Services missed their novice camps and competitions so it was decided that to get mass participation the Inter Services should be rebranded a Festival of Sport and an Adapted Ice Sports Championship.  The Inter Service Championships is always 4 race runs over 2 days and this year, this was adapted to form 2 days of racing, one day for the novices who were in their first couple of seasons of sliding and then a senior’s race for those who had experienced racing before. 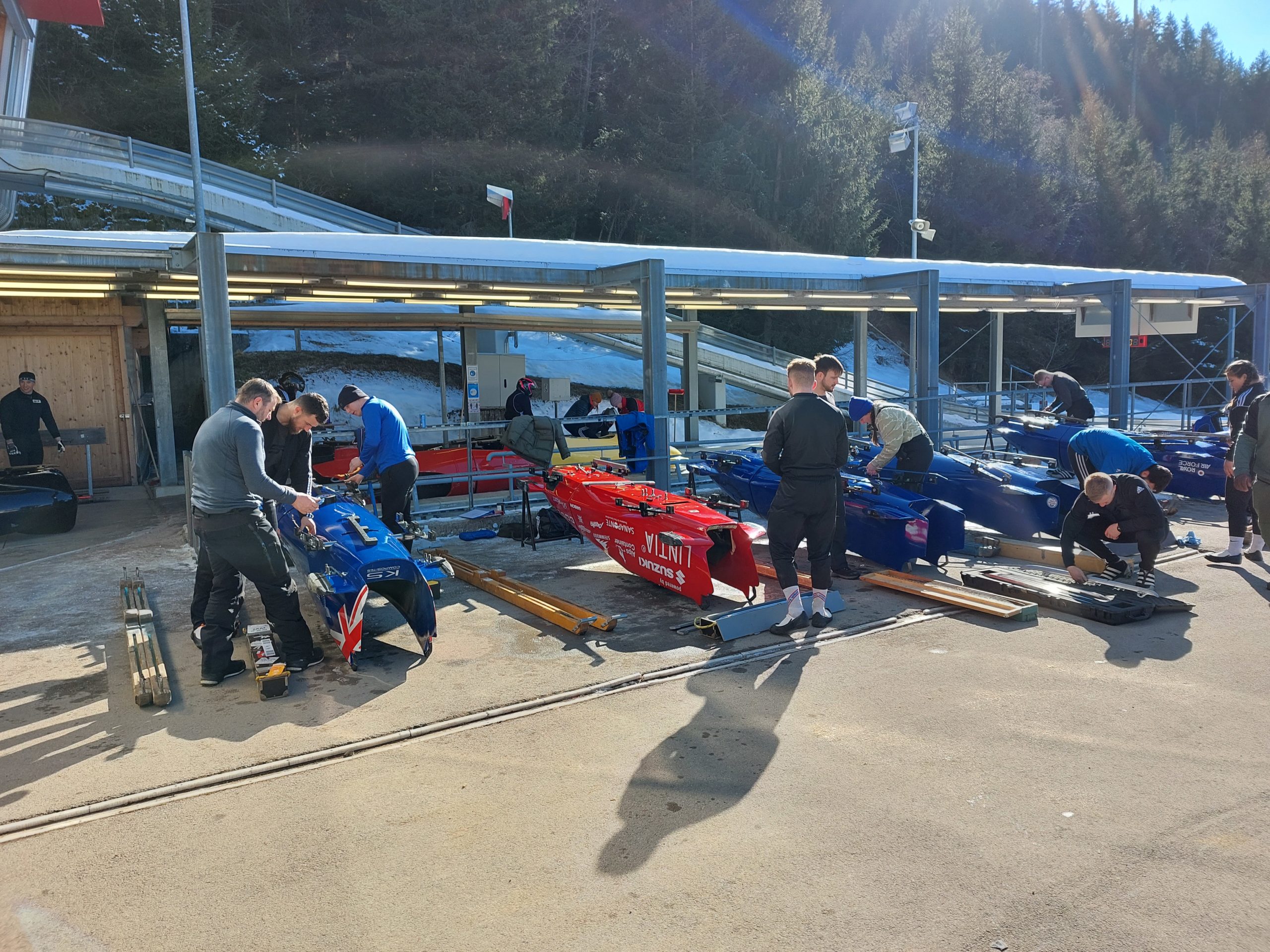 All 3 services had spent a week on ice immediately prior to the Inter Service week and this was an opportunity to develop their novices before the Inter Service training commenced on Mon 28 Feb.  What was fantastic to see at this event were the athletes who had recently returned from the Beijing Winter Olympic Games sliding and who were helping the novices.  This is the beauty of ice sports.  You can get a complete mix of experience on a track, and everyone will help each other out.  It truly is a close knit community.  Although the athletes will only get 2 training runs a day, many hours are spent at the track, sorting out the sleds and walking the track. 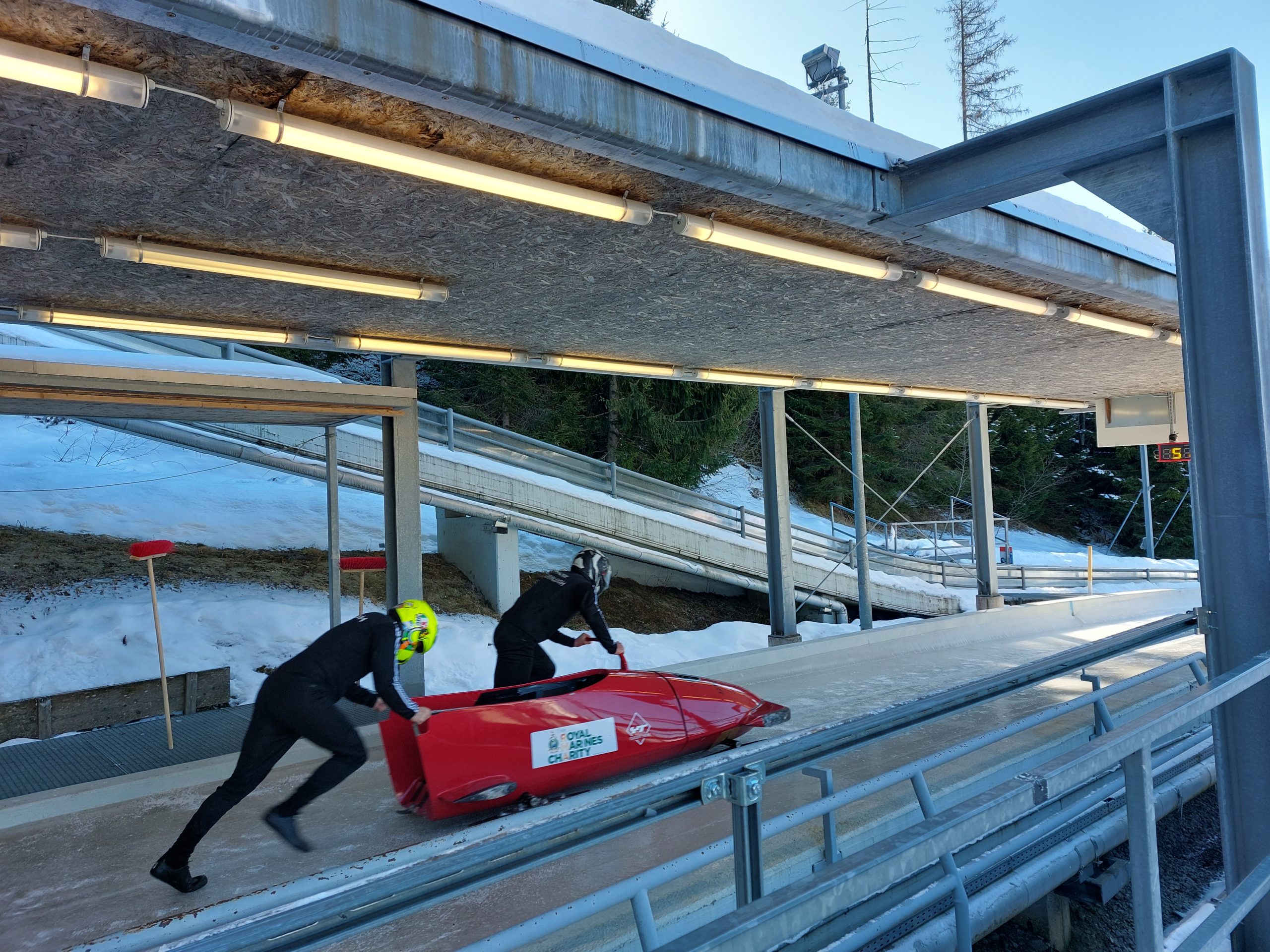 We were fortunate to have many very experienced coaches out in Igls and the coaches don’t just watch their own service athletes; they will provide feedback to all.  In the bobsleigh contingent coaching the RN/RM was Lee Johnston, the Army were coached by Sean Olsson and Capt Sarah Smith with the RAF being coached by Sgt Ross Brown. Skeleton and Luge coaches saw the usual suspects trackside with Carl Beet, Sid Lawrence, Robert ‘PJ’ Pritchard-Jones, Graham Holmes and Mike Howard ensuring the athletes had the best opportunities for success.

Our Olympic athletes were Mne Taylor Lawrence and LCpl Nick Gleeson who were fresh from pushing Brad Hall in the 4-man race (achieving a superb 6th place overall).  Nick also pushed Brad in the 2 man race and achieved 11th place (even after crashing on the 3rd run).  LCpl Shanwayne Stephens was back in the RAF driving seat after driving the 2 and 4-man bobsleigh for Jamaica at Beijing.  It was tremendous to see LCpl Gleeson jump into the front seat after his season on the international circuit as a brakeman.  All the athletes were happy to chat about their Olympic experience, inspiring the novices as they start their bobsleigh journeys.

Training runs took place Mon-Wed for skeleton and bobsleigh with luge training extending into day 4  Race draws were made on the completion of training and then it was down to the athletes to make their final sled preparations and focus on the task ahead.  All staff collectively manage the race area and jury positions for all 3 disciplines and bobsleigh were fortunate to have Ian Richardson, co-Director GB Bobsleigh and jury member for the IBSF, who kindly accepted our request to be our independent delegate on the race jury.  Even though we were running some novice races, adhering as close as possible to IBSF race rules is always preferred to give all the sliders their first experience of racing. 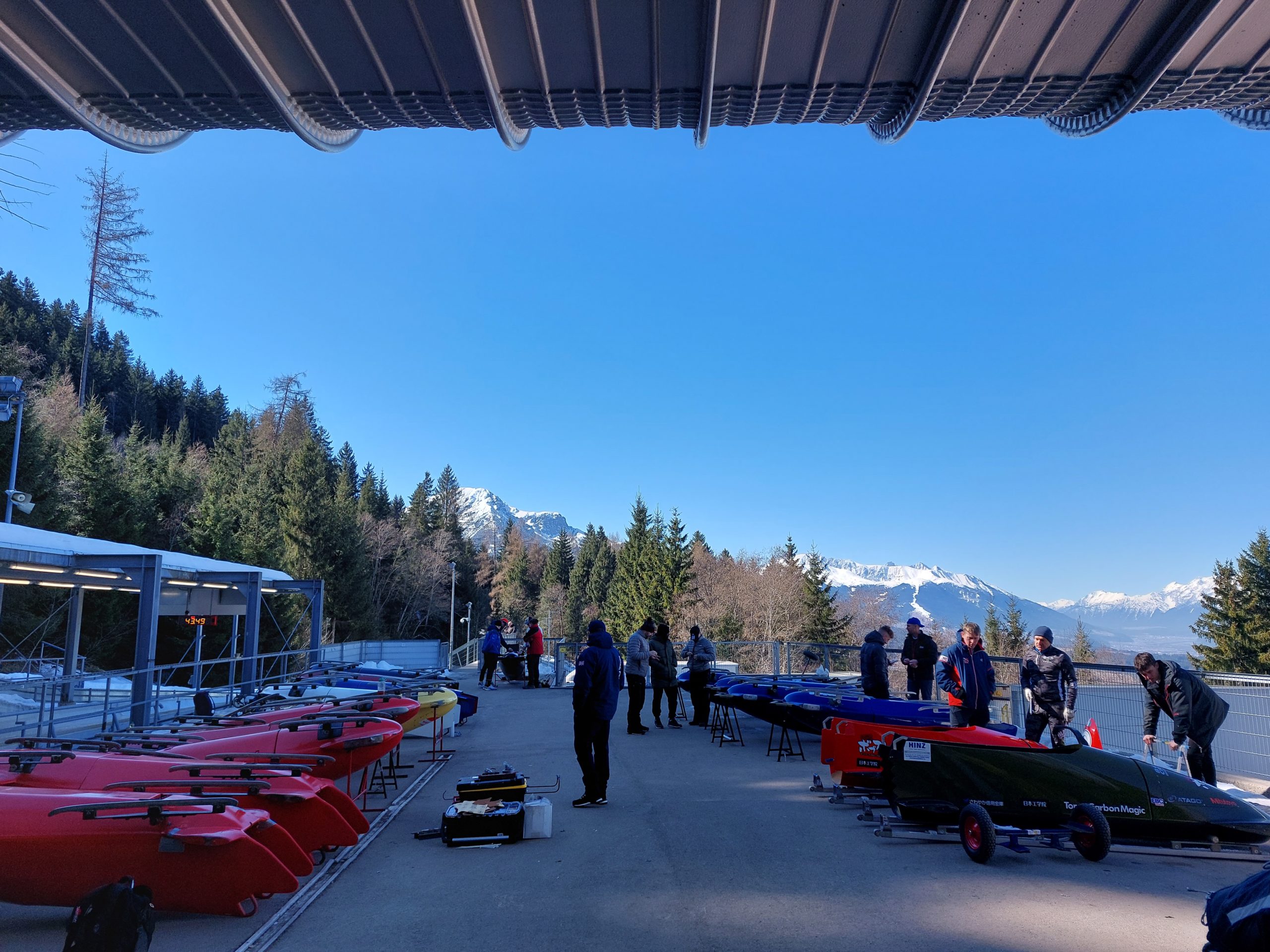 Race day dawned with skeleton taking the early slot on the track.  Novices raced day 1 and it was delightful to see the next generation of athletes get their first competition under their belts.  Senior athletes were racing day 2 and the support they offered to the junior competitors was second to none.  Race day 2 for skeleton showed that the drive an passion for the sport is alive and well despite the COVID induced break for all.  As this was an adapted event the competitors were all briefed that this would not be classed as an Inter Service Championships for this season only and there would be no team prizes.  The results for both the novice and senior races can be found below.

Luge kept to their format of race day on the Friday and it was highly encouraging to see new faces in the field as well as more experienced sliders.  The impending war in Ukraine had prevented UKAF Luge Chair, Ed Rolls, from attending due to his day job but he was keeping one eye on the unfolding events when work allowed.

Bobsleigh raced in the afternoon slot and the first bobsleigh down the track each afternoon of racing was the “spur” bob, testing all the clocks prior to the first race run being started.  The pilot of the “spur” bob was none other than Ash Morris who had returned to the RN/RM team this season as management after retiring from the RM the previous year.  Everyone was delighted to see Ash back and great to see this veteran of the sport get back into a sled and drive.  In the novice women’s race there were 6 teams and there were 8 teams in the men’s novice race.  Having had 2 years away from sliding, to see so many novice teams competing bodes well for the future of military bobsleigh.  The grass root development of the sport is essential and to have such a variety of different experiences on the bobsleigh track during the Adapted Ice Sports Championships contributed to it being a memorable event – from complete novices to Olympic medallists.  What other sport allows for this span of experience?  There were a few crashes during the races, but our excellent medical staff were always right there on trackside and huge thanks must go to SSgt Tash Sinclair and Sgt Lindsey Walker who spent hours at the track making sure that individuals could continue to slide safely.  The men’s senior race and ladies open race took place on the Fri afternoon and there were 5 male teams racing and 4 female teams racing.  It was another great afternoon of racing and everyone who participated in the Championships was just delighted to have the opportunity to slide.

As this was an Adapted Ice Sports Championships, the decision was taken not to compete for any Service Team Trophies.  It was agreed that there would be trophies in each race category for the top 3 places.  Instead of the traditional combined prize giving on the last evening of competition, each discipline would hold their prize giving at the end of their races.  Therefore, the bobsleigh prize giving took place by the finish curve once the final race had been concluded on the Fri afternoon.  This then gave everyone ample time to sort out all the bobsleigh kit and get it loaded onto the vehicles ready for the long journey back to the UK.  We welcomed Lt Col Karl Johnston RM who has recently taken over as Vice Chair of the RN Winter Sports Association.  Karl is an ex-bobsleigher having competed in the 2006 Turin Winter Olympic Games and he started his bobsleigh career on the Army Ice Camp back in 2000.  Karl is a veteran of a number of Inter Service Championships, so it was fitting that he presented the trophies at the Adapted Ice Sports Championships. 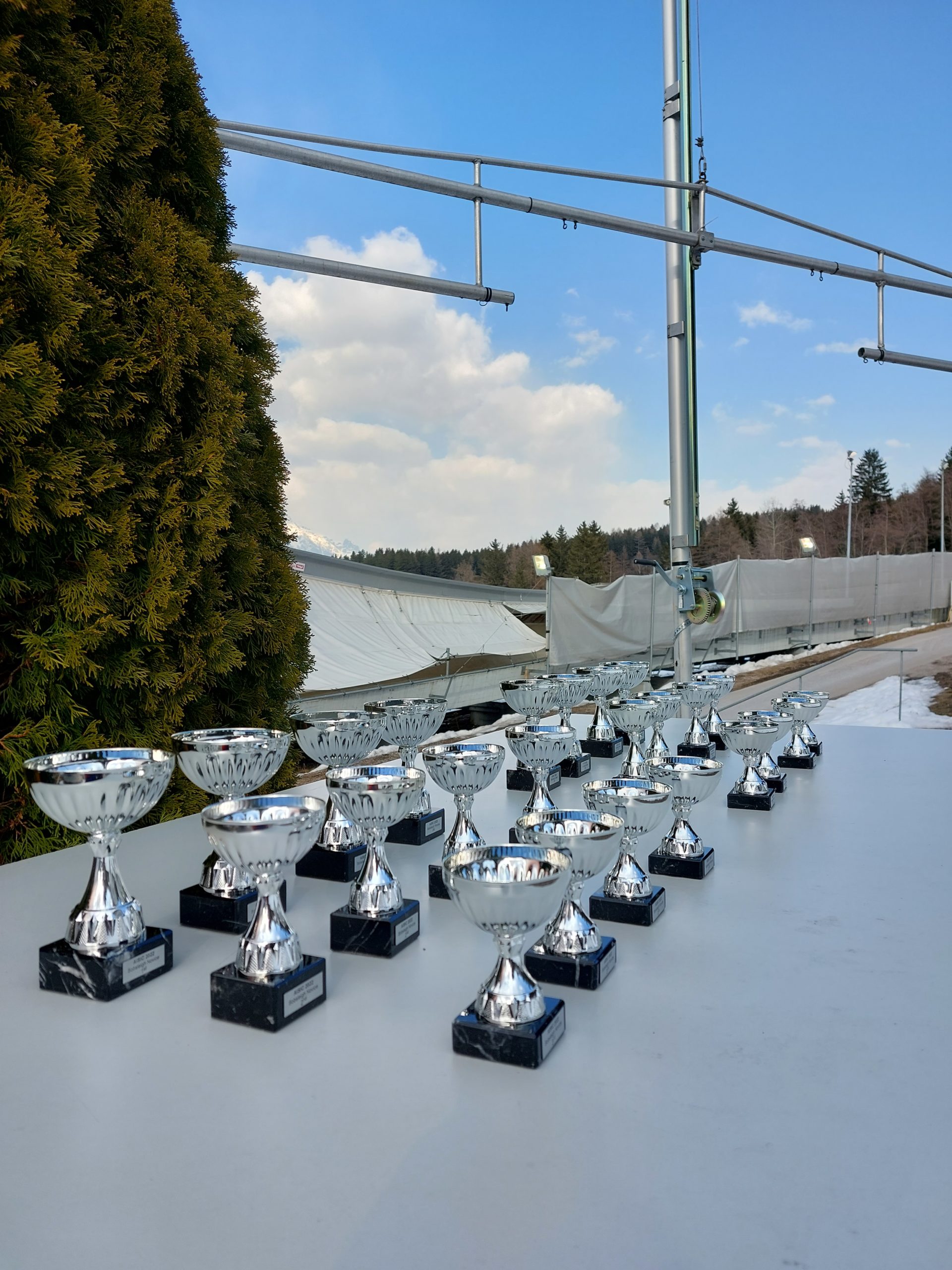