I feel we should start reflecting on the  effect that the pandemic has had across all our lives, for many personally, the large contributions made to supporting the NHS within the UK whilst still managing to conduct operations abroad, in support of disaster, peace keeping and upstream conflict prevention, this year has been a tough one.  Having understandably cancelled the competition in 2021, the committee, the Sports control board, the sponsors, and all those working behind the scenes ensured that an event was run this year and I believe the outcome cannot be described as anything less than epic. 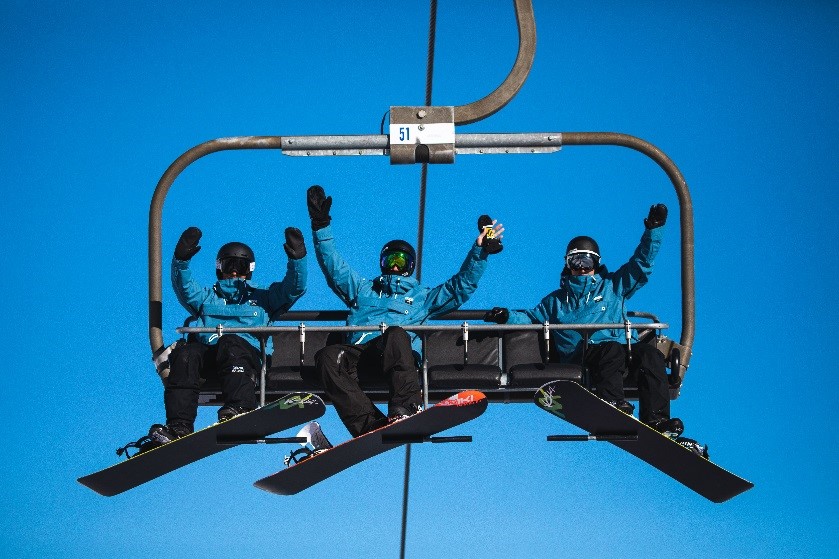 The competitors, with less time on snow than ever, came out in force to make this championship a memorable one.  With restrictions adhered across the board, with sponsors and competitors separated, no external events or grand opening and closing ceremonies, with safety in the uppermost of our minds to assure a fair and safe competition, all involved pulled it out of the bag.

This year felt different – I suspect due to the sheer joy of being out on snow, added to clear skies, and on Day 1, one of the best shaped, fair, and challenging boarder cross courses we have had at the championships. The ESF worked tirelessly to get the course ready for our arrival which meant that the athletes had the best start to training.

All three services pulled out their top guns as well as some newbies, although there was a notable absence due to supporting activities to Covid that saw a reduction in the overall team strength.  This called for an unusual revision of how we were to score the champs – in order to ensure that teams with less remained competitive.  This called for the top 8 men instead of 10 competing in the knockouts, and the top 4 women from each service.  This reduction made for no less of a competition however.  The boarder cross was fiercely fought, with fear of weather coming in, the hill team needed to ensure a slick race was run. 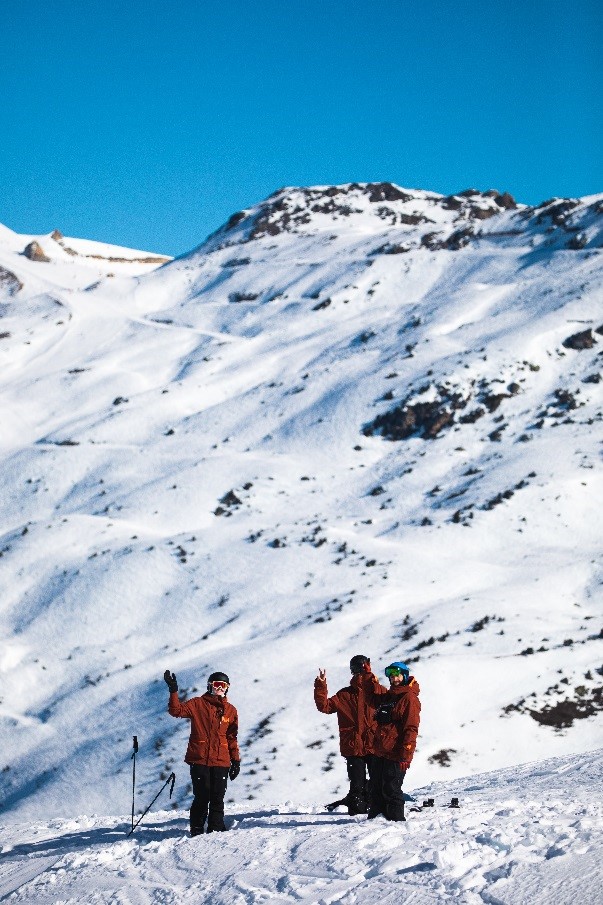 The grand final was a split with four of the seasoned riders vying for top place.  A strongly contested finish saw them over the line in a close pack with Flt Lt Patrick Morris, consolidating his victory from the last champs in 2020, surging to the finish line ahead of the 2 Army riders, Sgt Dale Gallagher, and Sven CSgt Benevides, and the RN rider Mne Chris Harrington respectively.  It must be noted that it was clear that this was going to be a close run Service position, with the top 9 finishers contributing 3 from each service.

The ladies race was no less fraught: the RAF looked the most threatening on paper with a seasoned team, sadly the RN were unable to field a full team this year due to operation requirements, which pushed this into an RAF Army head to head in the final.  It was Maj Jess Drew who really excelled this year, just pushing ahead of Cpl Jasmine Furber (RAF) to take the win for the Army.  Third was Gnr Jordan Buckley and 4th the multiple time winner of the Champs and the RAF Team Capt, Wg Cdr Claire Collis.   LSET Aaby Aldridge held 5th for RN, keeping them in the game. This start promised a fight ahead. 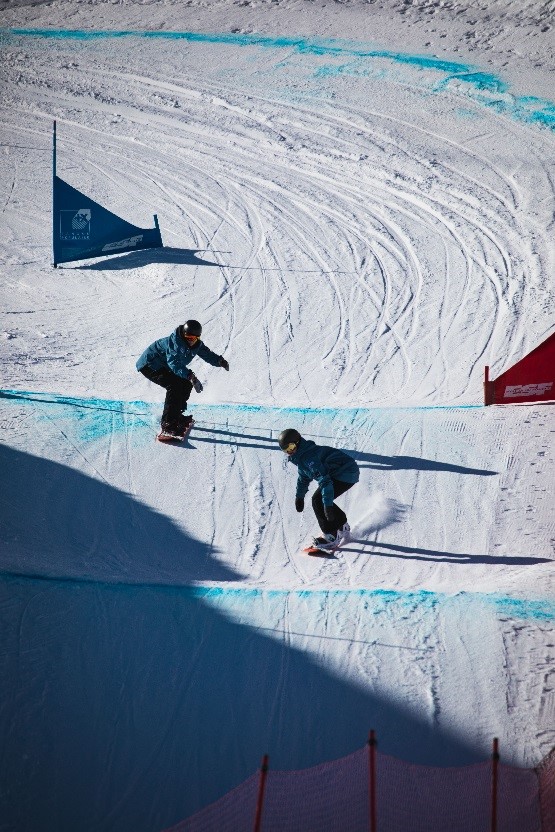 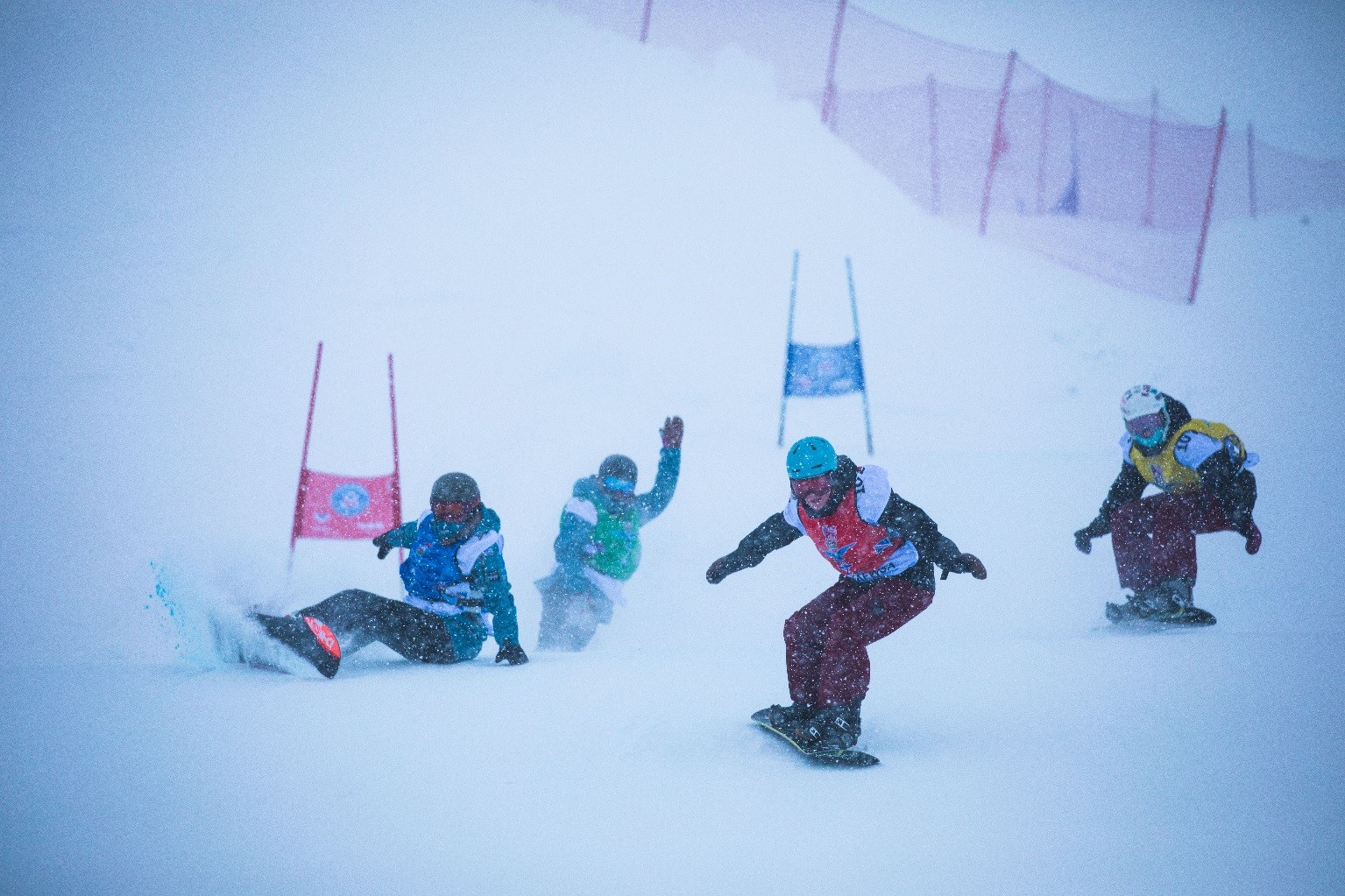 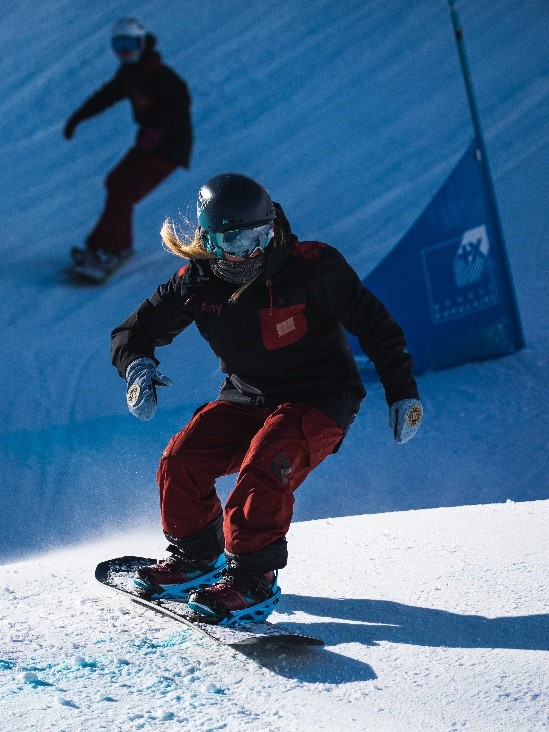 The scoring this year for the team competition also changed – worked out on finishing bib alone rather than FIS individual scores – this meant for a tighter competition, and less between the top riders, and only 2 points between the RAF and ARMY ladies, however with the Army finishing 2nd, 3rd, 5th and 6th, they screeched ahead of the RAF creating a 15 point gap to breach.  Again as ever thank you to BFBS, our longest running sponsor and indeed of the event! The location this year ensured visits from many, including Her Majesty Countess Sophie of Wessex, and all competitors rose to the challenge and put on an exceptional well fought fight.  Presentations this year were held up the hill, outside and socially distanced, also enabling the final presentation to be kept to a minimum due to Covid.

Excellent weather and conditions made the Parallel Slalom (PSL) qualifiers at Mottaret a swift cull: the ladies qualifying 8 of the 9 top seeded riders, with the few falls from the men creating an all to work for second heat.  The grand floodlit finals followed on that evening at the Stade, Meribel.  Despite the lack of Crepes this year, the sponsors and spectators turned out in force, and as ever were met with an outstanding competition, thrills through falls, gasps and general shock of disaster! An initial opener between the Sec of Champs, Maj Rob Ronz,  against the Director, Gen Jez Bennett, seeing Rob take victory for the first time (followed by an unprecedented exclamation of joy) laid the foundation for an exciting event; and the riders were not found wanting. 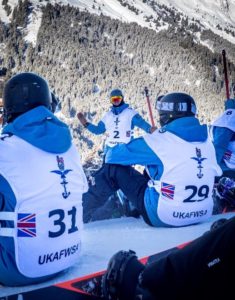 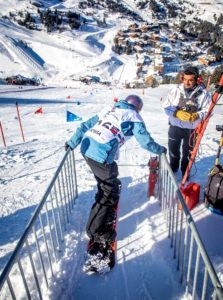 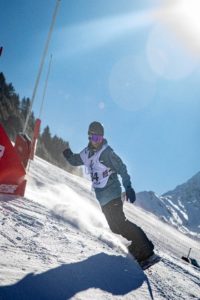 The last eight men through to the quarter final saw only one outsider, with Sgt Martin Boon (RAF knocking out one of the Army stalwart competitors, on his last championships, Lt Col Si Gough (seeded 6).  The Army had the strength in numbers with 7 of 16 through, but this soon evened out by the semi-final, with 2 Army, 1 RAF and 1 RN.  A surprise knock out of Fl Lt Paddy Morris in the semi finale led to RAF v RAF petite finale, with CSgt Sven Benevides vs Sgt David Grant both vying  for the top spot for the Army.  An initial first run saw a narrow margin between them – Grant took it wide on a cut up top section of the blue and gained a lead, and an incredible second shout saw Grant catch up to result in a dead heat! This has never occurred before, noting that the trimming gear measures 1/100ths of a second.  This called for a small recess whilst the Technical Delegate, Chief of Race, Chair (with his TD knowledge!) called an extraordinary discussion and to consult the FIS rules. In an epic result, the rules dictated two 1sts for Army, with Army taking the team prize.  The ladies was no less contentious…. 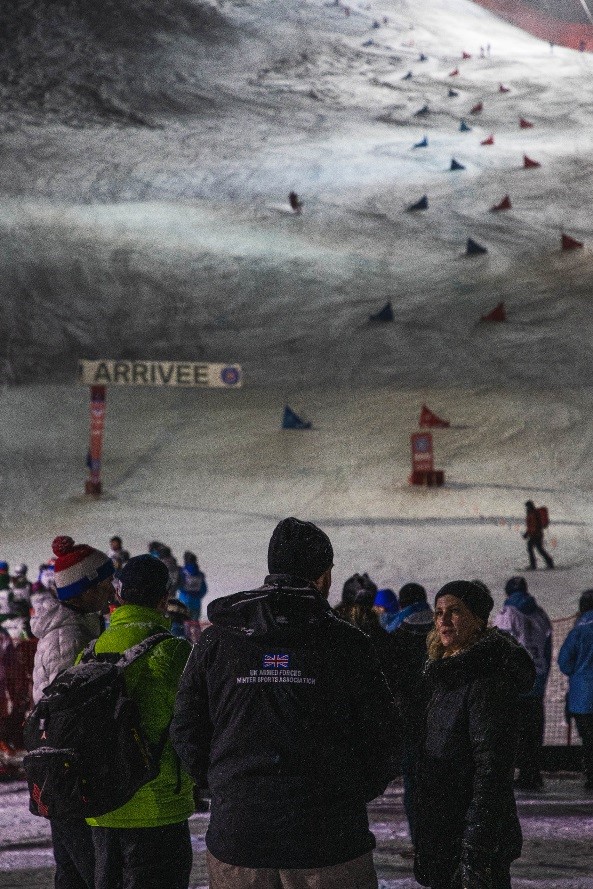 The ladies PSL event saw the RAFs Claire Collis effortlessly move through to the final with, with LSET Aaby Aldridge from the RN keeping out the Army from the Grande finale.  A hard fought close fight ensued, with Aaby performing at the top of her game and leaving no room mistakes – Gold for RN Silver for RAF and a bronze for Cpl Fiona Ross (Army) keeping them in the team competition. 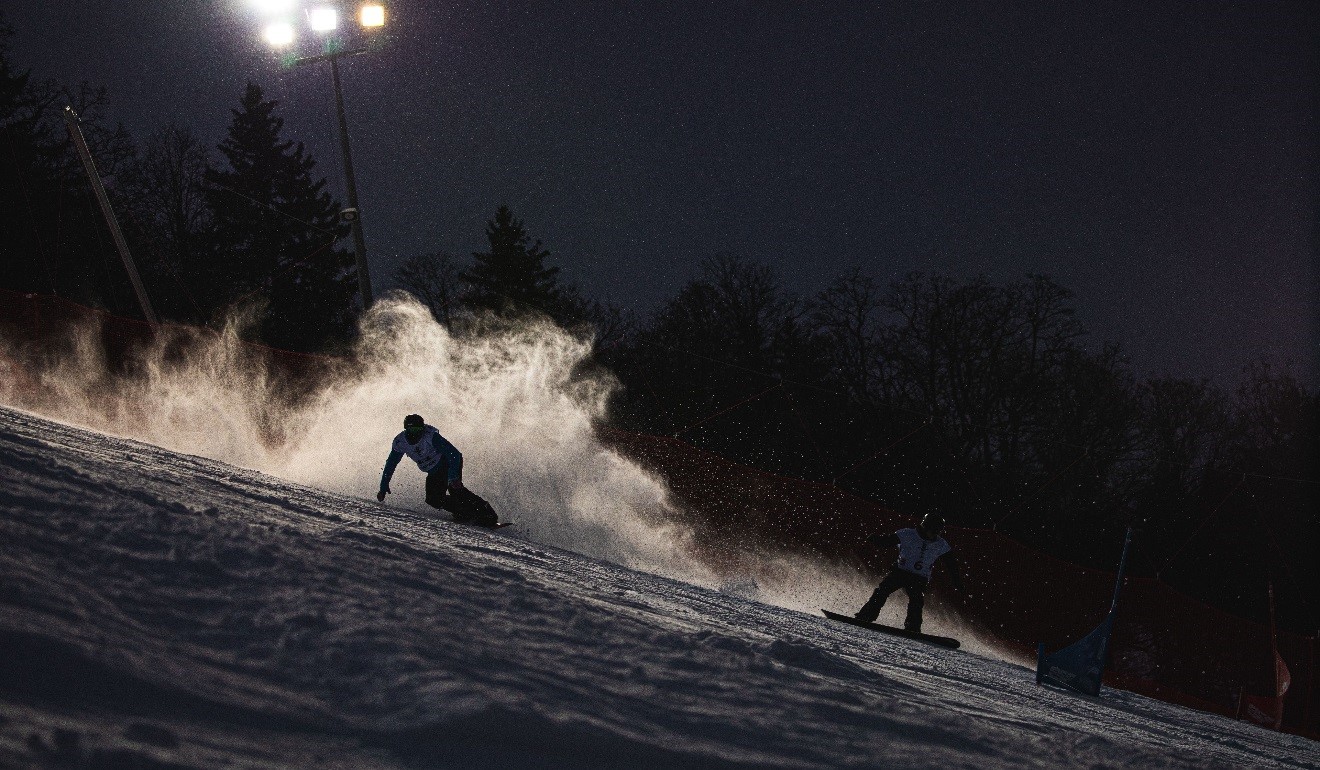 At this point, the Mens’ Army Team had put a good wedge between them and the other two Services in the team competition, but with the new scoring system they were very much ‘catchable’ – and the Ladies competition was down to the wire with every point counting for the final event: Slopestyle.  This year saw another first, a try of a new format, no qualifying runs, just a full training session that the Judges could ‘calibrate’ against: in effect, seeing in advance the runs that the riders will do on the day, but without the pressure of qualifiers.  This led to a surprising effect – the competitors went after more tricks, rather than the pursuance of the all-important ‘clean run’, as well as getting a lot more training time on the actual course that would be used in the finals.  The teams self-selected their top riders to compete (removing the risk of a massive wipe-out and a deselect in the qualifying runs!). 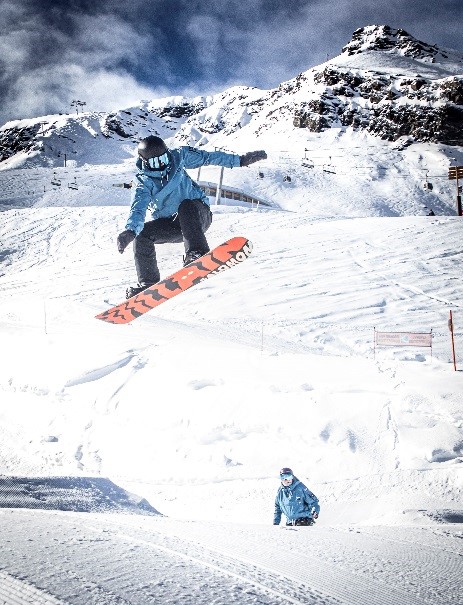 The ladies slopestyle had four riders vying for the top position, with the RAF really showing depth in the pack.  The first run saw Collis (RAF) take the pole position going into the second run, just pipping Aldridge’s run with a smooth 360 and some big grabs. Aaby in second, pulled a bigger run but was still a point off – this meant gold for Collis, silver for Aaby from the RN and a strong

performance from Pte Izzy Howe keeping the Army in the team competition with Bronze. The men’s pack was swiftly divided – with the final run coming down to the wire – but Paddy held on tightly and secured himself the Gold, with a close run silver going to Mne Chris Harrington (RN), bronze going to CSjt Sven Benevides from the Army. 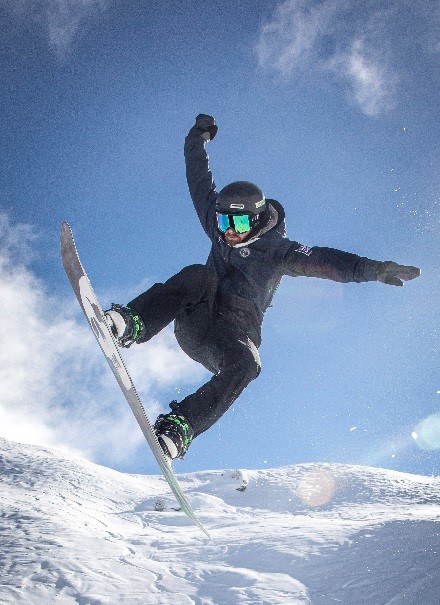 Overall, the Men’s slopestyle team event was a closely fought competition with Army just managing to keep ahead of the RAF with 3 points in it. Ladies competition saw the RAF squeeze out the Army by 1 point.

The best trick award and winner of the Nelson Pratt memorial award went to Flt Lt Paddy Morris with a 50/50 Rail with a frontside 360 off.  Best newcomer was awarded to Cpl (RAF) Jasmine Furber, with steady performances across the board in her first champs – more to come from this talented competitor. 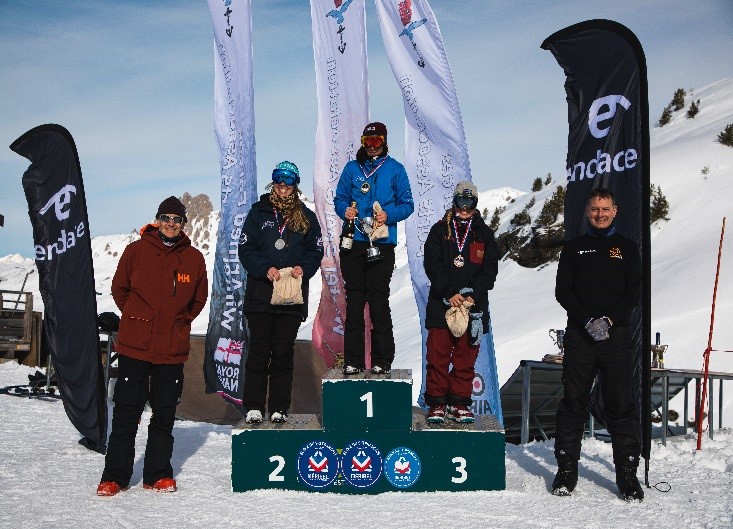 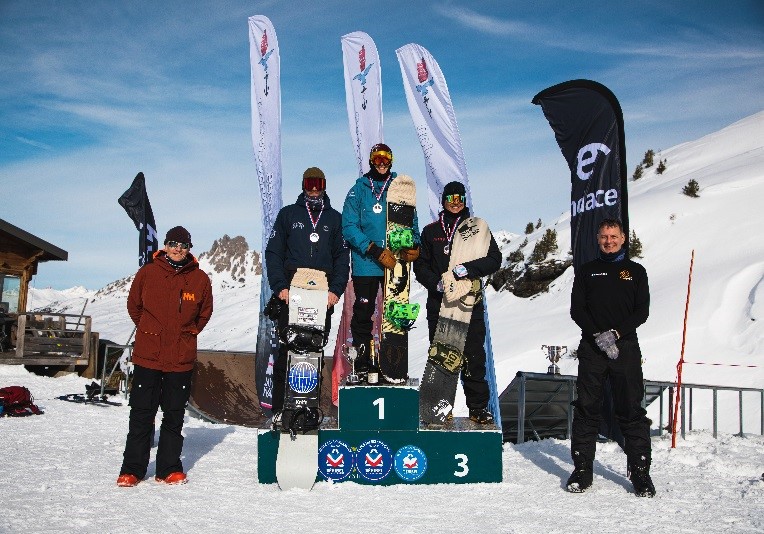 This year, despite the restrictions in place, and less time on snow for many of the competitors, we managed to produce  a hugely fought competition.,  With the sponsors, competitors, hill teams and committee all pulling their weight to make this happen, creating a safe environment in which to compete, ensured an excellent time was had by all.  We remain in Meribel next year however the competition will move to March due to a clash with the World cup being held in Feb, and look forward to further easing of restrictions and a continued move back to reality. 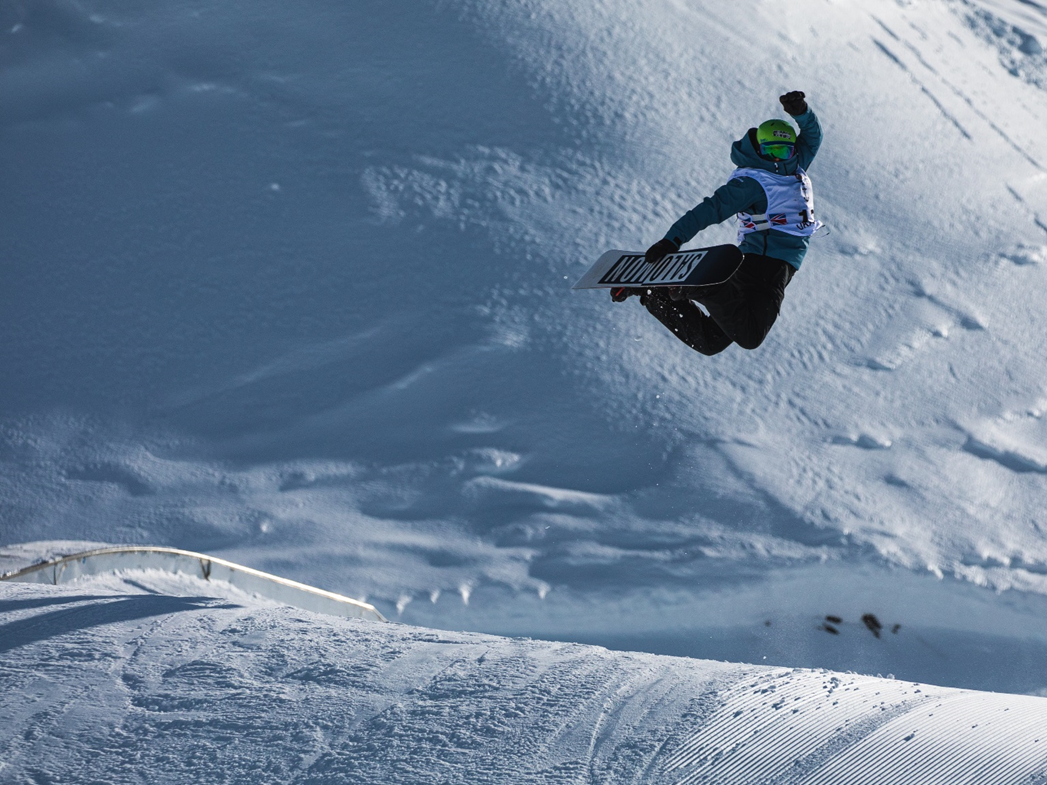 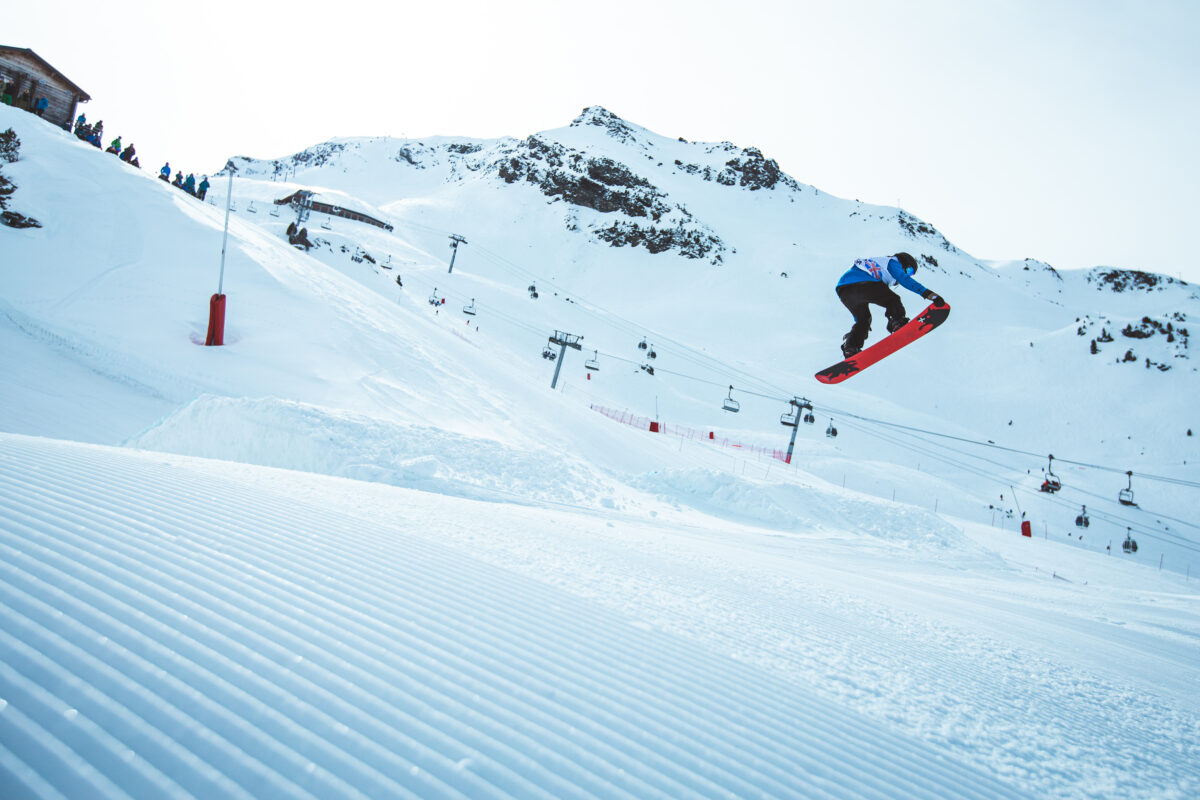