With the latest COVID variant continuing to throw curve balls and an upcoming world crisis to contend with, agility and adaptably were the order of the day in enabling a highly successful Inter-Services Telemark Championships, and it would be remiss not to highlight the remarkable efforts of the Organising Committee, our Meribel partners and, of course, our Sponsors all of whom ‘held their nerve’ to deliver a fantastic event.

With the cancellation of Ex Telemark Titan, in Pralognan la Vanoise (PLV) France, which normally comprises the British Championships, as well as the Army and RN single Service Championships, and the RAF Alpine Championships succumbing to the impact of COVID, all 3 Services had to adapt their pre-event training regimes. Building on lessons learned in 2019/20, the Army conducted a shortened camp in PLV, focussing development areas on jump practice, start-gate drills and skate training. The RN Telemark Team joined fellow RN Alpine Ski and Snowboard Teams to conduct a 2-week training camp at Tignes. This afforded a great chance to train with other snow sport discipline team members and provided an opportunity to ‘convert’ one of their Alpine racers to Telemark. For the RAF, the impact was more profound: whilst they conducted a successful Development Camp in Tignes in December, they only achieved limited race training at UK indoor slopes so faced a daunting week in Meribel. 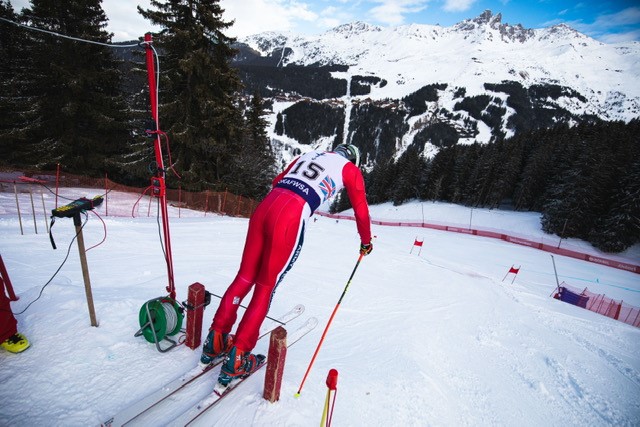 With notable absences of some of the younger ‘big hitters’ from both the RN and Army teams and sub-optimal preparation for everyone, delivering a safe Championship was, more than ever, at the forefront of the organising committee’s thoughts.  Despite best efforts, a combination of factors led to only the Army Team managing to field a full Squad. This led to a request to reduce the Team Championship from 6 with 4 counting racers to 5 with 3 counting. Testament must go to the Army’s sporting ethos (as clearly this was not to their benefit!) that this decision was universally supported.

As always, the Championships commenced with the Balfour Beatty Giant Slalom, albeit a day later than normally programmed to enable additional, much needed training. This year we were honoured to have HRH The Countess of Wessex present the medals and with Captain Stefan Hurst (RLC), taking a convincing win following a 6-year absence from the Army Team, Colour Sergeant Steve Farrant (RM) taking 2nd place, with his first podium finish in 6 years on the RN team, and Staff Sergeant Danny Johnson (RE) in Bronze we saw a flavour of how the Championships would unfold; all 3 podiumed in both subsequent races. After a phenomenally brave performance from the RAF team, who finished with a combined time only 7 and 4 seconds behind the RN and Army respectively, it was the team event which looked most likely to be hardest fought and at this stage it looked as though the Army’s sportsmanship might cost them the championship! 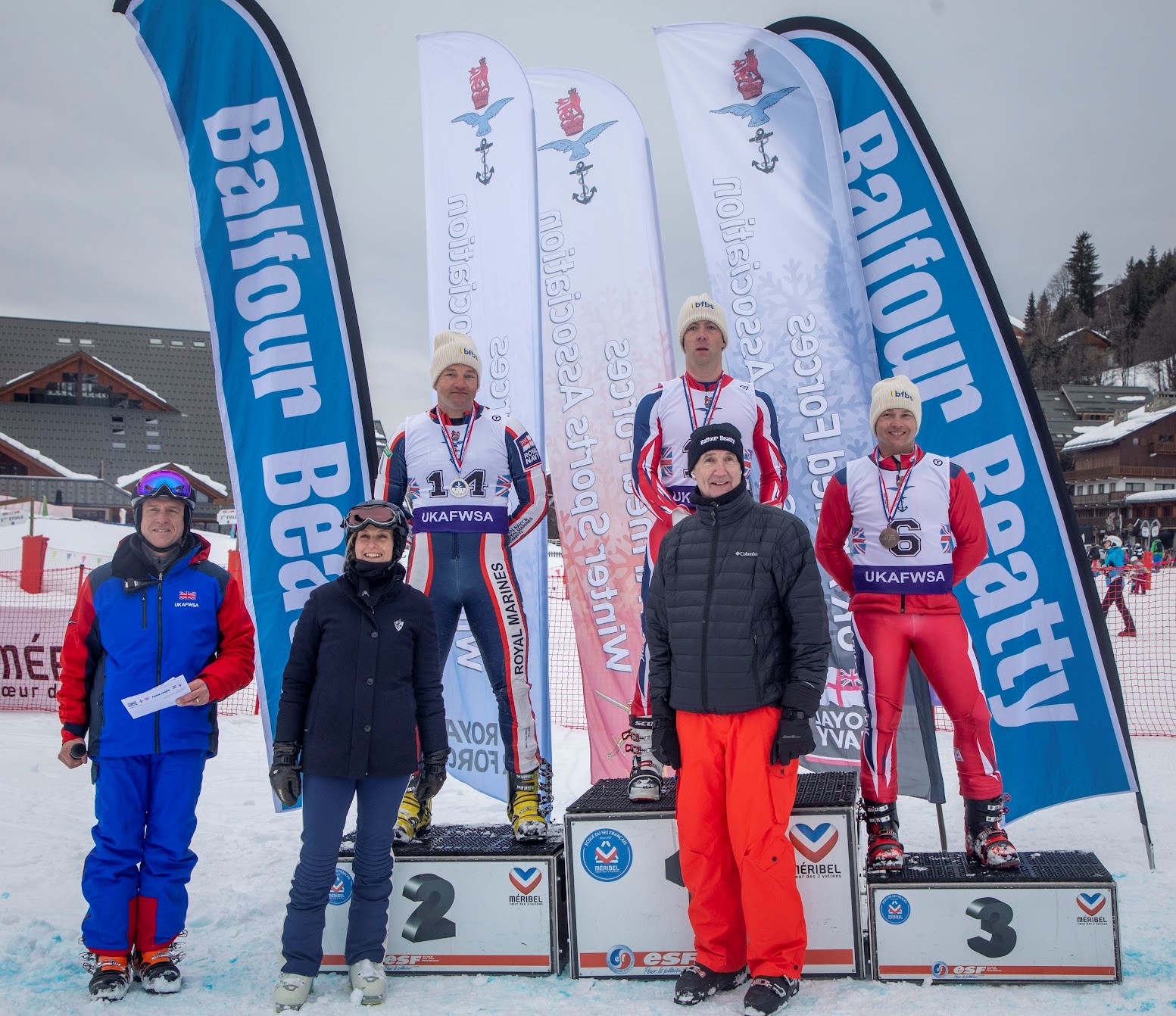 With one race in the bag, disaster struck. After one of the race committee testing positive for COVID, the whole team were required to isolate for 24hrs whilst awaiting PCR results. Miraculously, no further cases where identified, and demonstrating the agility and adaptability previously mentioned, the race programme was adjusted to allow 2 races – the Classic and Sprint Classic to be conducted on Thursday. This meant that despite the devastating loss of the BMT Parallel Sprint, and huge apologises to BMT for that, we still had a viable Championship.

The BT Telemark Classic followed on another glorious day, and despite the cancellation of the ISSSC Barbeque, and accompanying sickening smell of burgers as the athletes cross the finishing line in this brutal race, it was another superb event. The Podium participants remained the same, but this time Staff Sergeant Danny Johnson beat Steve Farrant to the Silver medal position. A strong performance from the RAF’s Squadron Leader Pat Mitchell, who took 4th place, saw the RAF team again demonstrably closing in on the other 2 Services teams, but it was the Army who took victory in the team race, with the RN in a close Second place. 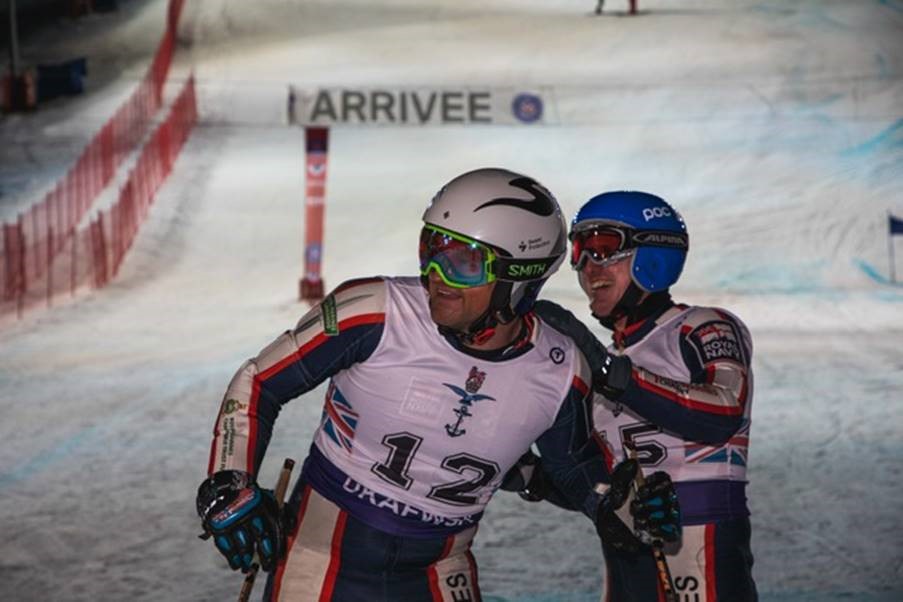 After a very tough Classic race, the Teams’ resilience really came to the fore in the newly re-scheduled Advalus ‘Night’ Sprint Classic. Not only another tough race, but a power cut to the lift and floodlights caused further delay and put overall Championship success into jeopardy. However, as always, the relentless professionalism of the Meribel Hill Team, led by the unflappable Yannick Favieres saved the day. With only minutes until cancellation, they had the power back on, and we were away. Podium results mirrored the Classic with the Army taking 1st and 2nd and despite an incredibly valiant effort from RN Team Captain Gordon MCrae (RM) and Lt Cdr Ramsay Shaw (RN) who followed up Colour Sergeant Steve Farrant to take 3rd, 4th and 5th places they weren’t quite quick enough beat the Army. This meant the overall Championship went to the British Army for the first time in 6 years. Overall individual results: 1st Captain Stephan Hurst (Army), 2nd Staff Sergeant Danny Johnson (Army) and 3rd Colour Sergeant Steve Farrant (RM/RN). 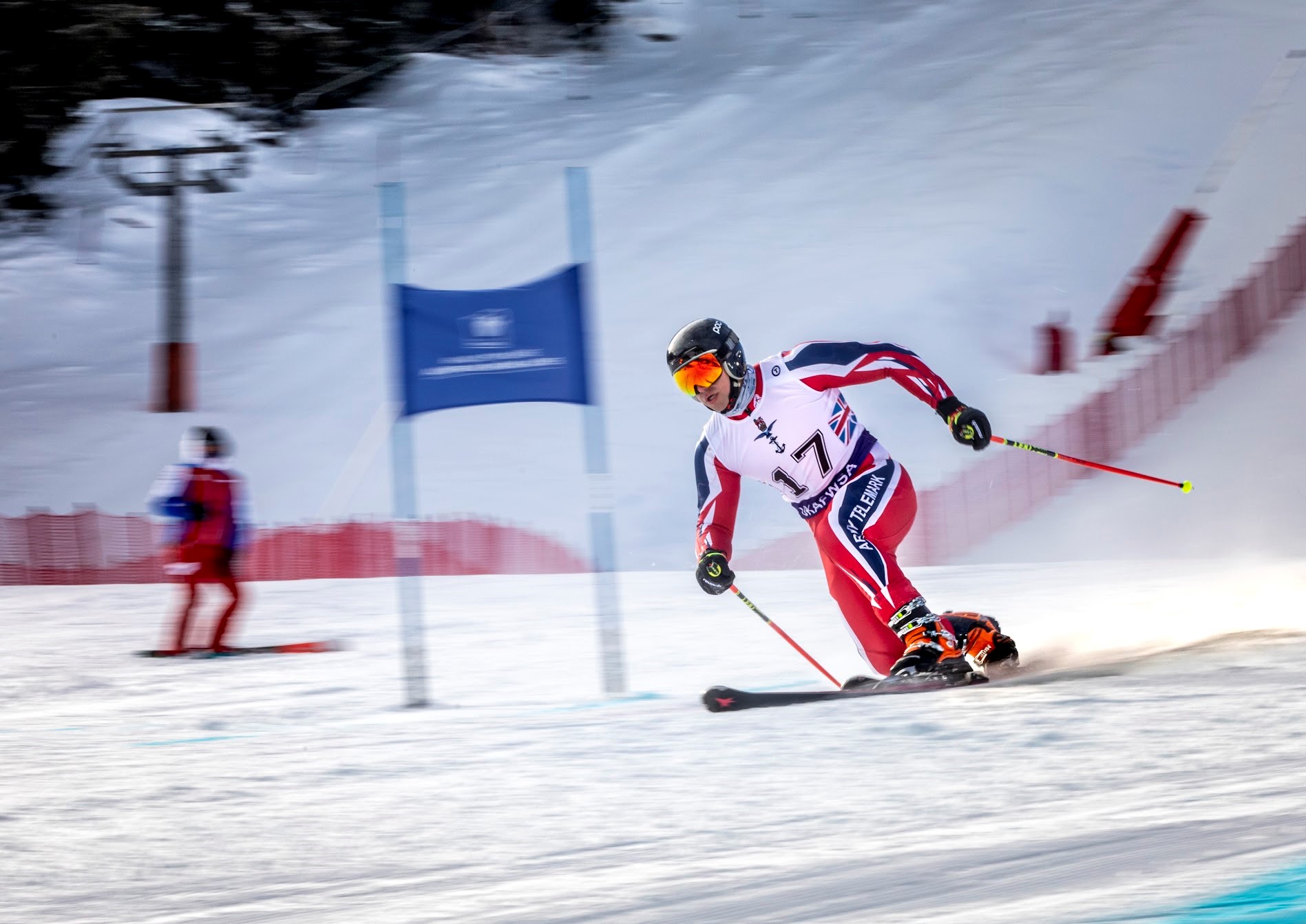 The ISSSC Telemark community is defined by the comradeship and respect between our teams which this uniquely physically and mentally relentless sport engenders, and it was again great to see new faces competing. Of note, congratulations to two new Army development skiers Capt Alex Leslie (RE) and 2Lt Nigel Foskett (PWRR).  Both performed extremely well with Capt Leslie achieving the Best Newcomer award.  Skiing for the RN, Sgt Andrew Spain, the ‘Alpine convert’ competed in the GS, but sadly picked up an injury during an Alpine race that took him out for the rest of the Championship. And finally, congratulations to female competitors, Wing Commander Alex Smyth, Flight Lieutenant Sarah Shave as well as Flight Lieutenant Ben Tawny who all debuted for the RAF in the ISSSC Telemark Sprint and who show great promise for the future. 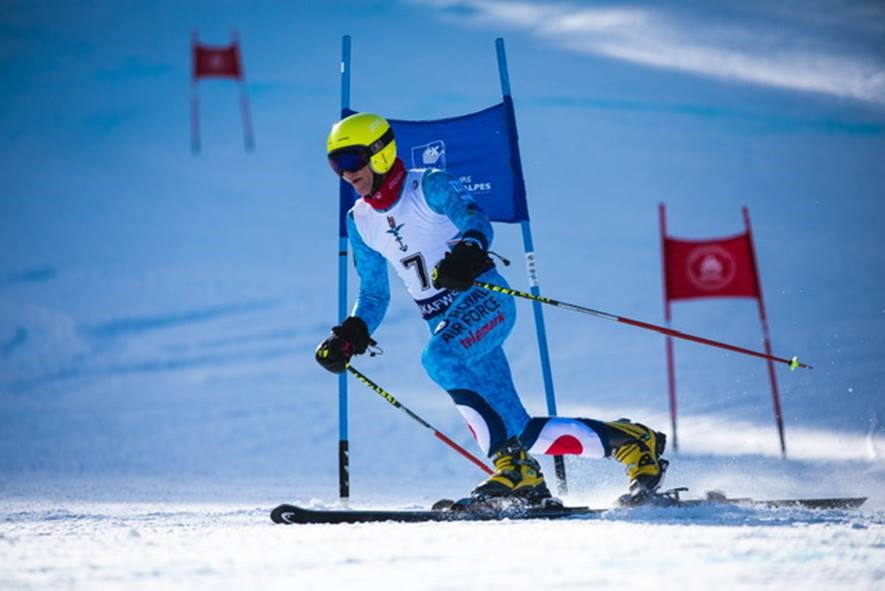